Last Friday night I went to an event at Bank Street Arts, organised as part of theSensoria Festival in Sheffield. 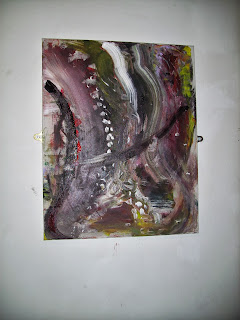 It had been one of those magical days, end of the summer, when each sunny day is a precious gift and there’s a hint of woodsmoke and falling leaves in the air. I’d had a good day at work in Manchester, and had wandered down to Albert Square to take in the scene and get myself some street food from the Food and Drink Festival based there. My journey on the stopping train through the Hope Valley was as good as it gets. Dusk was falling over the landscape. As we pulled into Sheffield Station lights came on, lifting the darkness. I’d got talking to a travelling companion. She had her bike. The train was delayed. She was anxious about being on time for a gallery opening. At first I thought she must be heading for the same event I was, but as we talked, I found out she was heading to Snig Hill. She was performing in an anti-choir, an experimental sound accompaniment to an art show. I pointed her and her bike in the right direction as we left the station and made my way to Bank Street. A singer in an anti-choir. A summer day at the end of September. The scene was set for a special evening. Bank Street Arts has its home in some lovely interconnecting terraced houses in a part of Sheffield that has always had an air of mystery for me. I found a door and opened it. In the room in front of me were my friends Keith How and Jim Ghedi. Jim is a wonderful musician and Keith is an inspired artist. Keith brings experience and a young soul to his work. Jim brings youth and an old soul to his. Their collaboration is something very special. Their performance started on time, in a room with some of Keith’s paintings on the wall. Jim had his musical instruments and a chair in a corner, by a window. The room swiftly filled with an audience curious to see what this performance was all about. The idea of painting in response to music isn’t new. Many artists and writers work to a soundtrack in their studios. But working in direct response to a musician’s performance is an unusual and courageous experience for all concerned. The audience quickly settled into concentration, sitting on the floor or leaning against the wall. In a one hour performance there was very little movement. Everyone wanted to see what happened next. Jim’s music, incorporating his lovely voice, his guitar and saxophone, samples of conversations with meaning, filled the room and cast its spell. Keith started work on his canvases, three on the wall and one next to Jim. The two bigger canvases were painted red. Working with colour, hands and brushes, Keith painted,sometimes moving to the rhythm of the music, working across the four canvases. The painting made the music manifest. The sound became visual. Psychedelic. Synaesthetic.